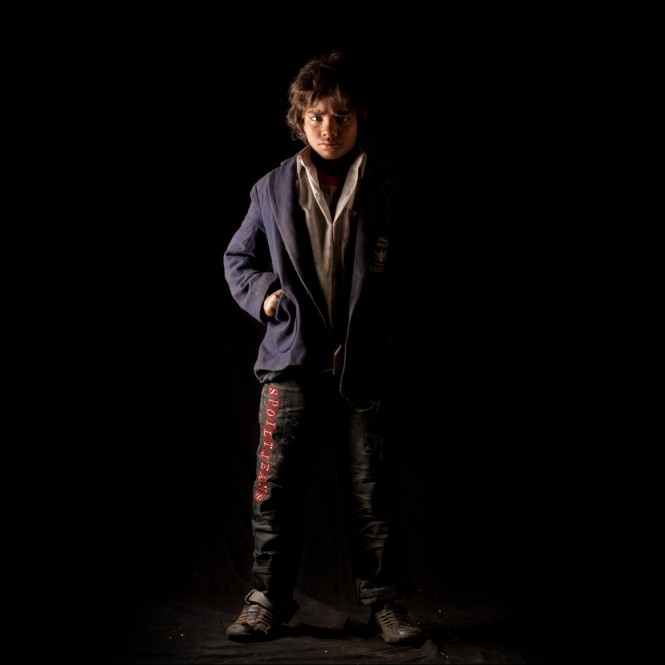 My father is an alcoholic and beats us a lot, which is why we two brothers ran away from home and came here. Then we got into the habit of sniffing glue. My brother used to inject himself with drugs. We used to watch him inject himself and wanted to do it too, but we didn’t. He used to sniff glue and take pills. But we only sniff glue and sometimes I smoke bidi.

I go to the Old Delhi railway station. When the trains come near the tracks, we jump and hang onto them. Once the train stops and people start getting off we collect the bottles. I sell those bottles and eat some food and then I sniff glue. I sniff glue to curb my hunger.

I don’t study. I used to go to the centre at Mehrauli, but I ran away from there because the kids beat us up. It’s more fun here. There are lots of kids there from different places and that’s why they beat us up. They are the kids who have been there for a long time. It’s near Qutub Minar.

I want to give up sniffing glue, but I can’t. All these people keep sniffing glue. Watching them makes others get in to the bad habit as well. When you sniff glue, your lungs get spoiled and then the person dies very fast and once he dies they remove his kidneys. Sniffing glue in the summers ruins the lungs even more.

My mother is dead. She has been dead for over ten years. I had an older brother in the village. He is also dead. He developed swelling in the stomach. His stomach looked like it was a fat man’s stomach. I think water caused it. To get his treatment it cost us 2 Lakh Rupees but even then we couldn’t save him.

I really like living here because all the kids here play and watching them makes me happy. When I grow up I want to work hard and improve my life and then I would like to settle down and have a house.